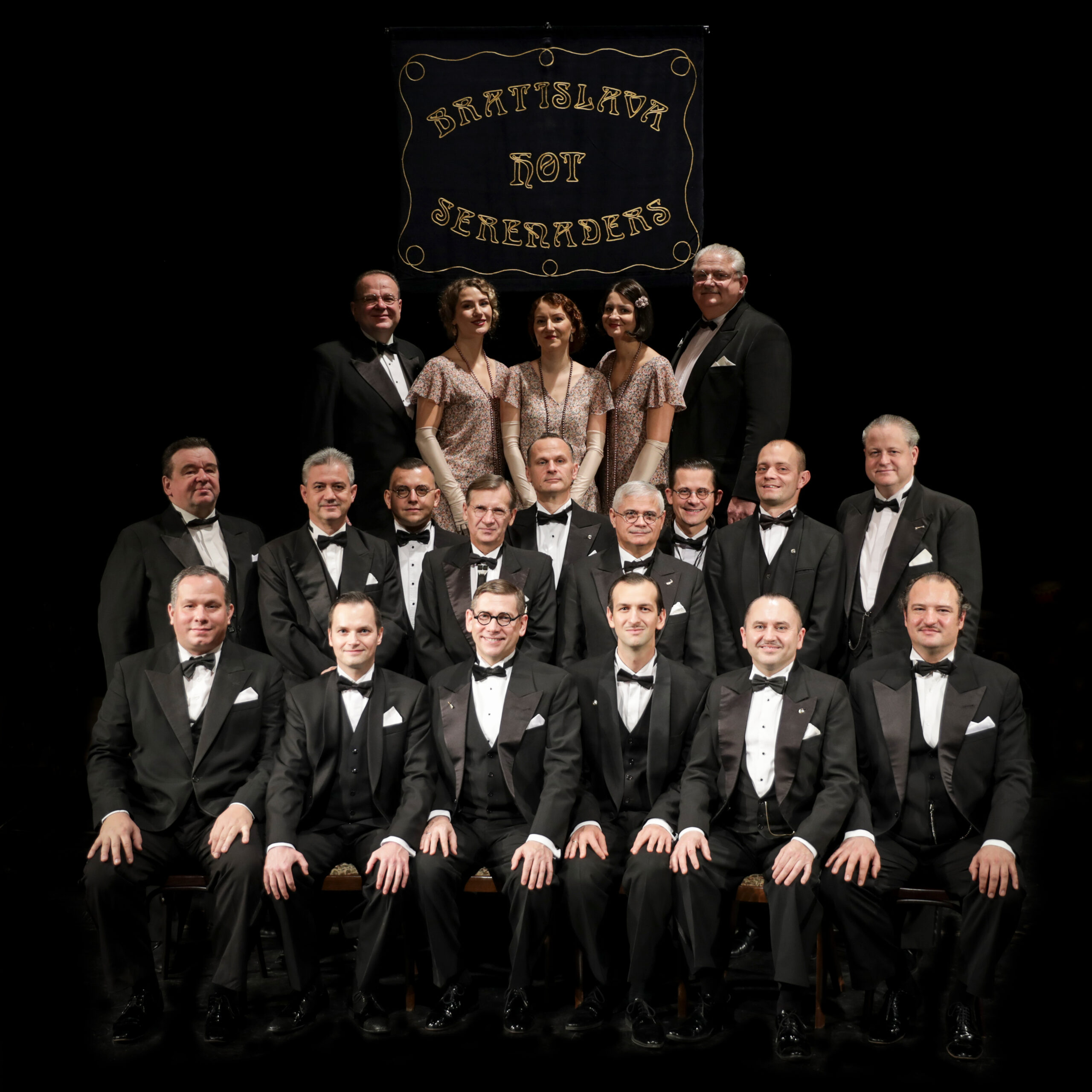 The Bratislava Hot Serenaders orchestra belongs among the few strictly-oriented music bands in Slovakia. Its eighteen enthusiastic players have met from the season of establishment in 1991/1992 without an interruption and its style remains unchanged. What glue keeps them together during our present turbulent economic period?

The glue is their love of music. They devote all their free time to “Hot Jazz” or “Sweet and Dance Music” which arrived in Europe at the end of the Twenties from America. Thanks to gramophone business, very extended in America, the orchestra´s boys can search for old shellac gramophone records, listen to them till early morning and note-by-note reconstruct the old sweet melodies and imitate their arrangements. After hours of practicing, they dress themselves into traditional costumes, put the brilliantine on their hair and start playing their vintage instruments and singing into a lone microphone.

The Serenaders have yet another love. It is also music – Slovak music. It was played and recorded in Bratislava and Prague in Thirties and Forties and is focused around one name extremely popular in that period: František Krištof Veselý. The doyen of Slovak pop-singers made famous many melodies which are now adopted by BHS.

Since 1992 they continue entertaining their unbelievably loyal and constantly growing audience. Their mutual friendship and love of entertainment results in a sort of obsession. They often visit each other and play for themselves at informal occasions. Even then they function at full throttle, playing with the drive and spirit so important to this style of music.

Their successful cooperation also led to a new musical-styled performance in the Štúdio L&S theatre for two following seasons. In the show “Ja som optimista”, the songs and melodies famed by František Krištof Veselý are accompanied by stories and anecdotes from old Bratislava.

All this success eventuated in offer to record music for successful musicals and productions: Some Like It Hot (dir. Milan Lasica), Piano Revue (dir. Juraj Nvôta jr.), Garderobier (dir. Roman Polák), “Pod cudzou vlakjou” (Under the foraign flag) (dir. Rastislav Ballek) and “Niekto to rád Slovenské” (Some Like It Slovak) (dir. Stanislav Štepka).

MUSIC WITH THE CATCHY OPTIMISM

Bratislava Hot Serenaders are characterised by a precise handling of the original musical material and by using of historical instruments, stylish interpretation not excluding even scanning of the sound and overall performance at the concert podium. The result is a strong autentic artistic experience through which the orchestra enchants the domestic as well as the overseas scenes. Eighteen professional musicians, devotees to the Hot Jazz or Sweet and Dance Music – a music genre of twentieth and thirtieth of the last century who came from America to pay a visit to Europe, are meeting regularly, they rehearse and they are giving concerts in configuration that remained almost unchanged since 1992. Today, the Bratislava Hot Serenaders belong to the high profile ensambles in Slovakia.
What bonds the orchestra members is the love for music that originated in Slovakia, that was recorded in Bratislava and Prague and the common denominator of which is the extraordinary personality of František Krištof Veselý whose smash hits have been popular in the 40s. The Bratislava Hot Serenaders (B.H.S.) regularly performs at home and abroad within the independent concert and jazz festivals. To their great successes abroad belongs a triumph at the Great Festival of Music of 20s and 30s in Saint Raphael, France, where they won the main Sidney d´Or award.
The orchestra players are supported by female vocal trio The Serenaders Sisters and by vocal soloists – crooners Miloš Stančík and Jozef Kurilák. A special guest of the orchestra shall be Henry de Winter from Berlin.
Leader of the B.H.S. orchestra Juraj Bartoš (trumpet) plays also in the other bands, in the Slovak Philharmonic orchestra (soloist), Big-Band Vienna (soloist), Prague Swing Orchestra (member and soloist), and in many other jazz and other formation. Juraj Bartoš is sought-after as a creative studio players and his performance represents a waranty of the sound media musical quality. The rumour goes that with strenght of his personality, with his creativity and patience he is able to attract even clearly anti-musical types to the music and to create jazz stars out of the people who never sing.

He also talked to us about – what is that leads – at the beginning of the 21st century – several enthusiast to dust and to reconstruct the old recordings by various orchestras and interprets of music from beginning of 20s and 30s of the last century and what inspiration they are looking for in the period, which for many people represents rather a symbol of not very pleasant social and economic events:
Despite of the sad historical facts this period at the decline of the millennium was symbolised also by some bright aspects – the rapid development in many areas of social life and science, development in technique as well in the arts. In the world of music the traditional structures of musical procedures became more relax, the free composition form became enlarged; the bitonality, atonality and impressionist soundings were used. Composers were looking for their inspiration in technical novelties, expressionism, folklore but also in jazz. And exactly people who express their feelings in may be the most emotional way – the jazz musicians and composers – came best in terms with this period. If you concentrate better and listen to the „snappy“ tones in the old dusty shellac jazz records from 20s or 30s you may be find out that here, exactly here you can find the right view on the world – that pas tone as well as the present. Just listen to the old ragtime, New Orleans style, Dixieland or early swing. We shall find out that the bright-tone music and clear harmony relieved of all the heavy disharmonic procedures, dodecaphony and various-ism that´s the music full of simple beauty, people and harmony having beneficial effects on us. Music soaked with the catchy optimism in which also the sad tones sound human and warm. We believe, that this exactly was and still is the right way, how to come in terms with heritage of the contradictory period in which our musical ideals lived at beginning of the 20th century, and a period through which also we are still partially living at the turn of the century. The fact that is still addressing to us represents the evidence that it really was timeless and unrepeatable. And as also we are trying to be at least a little bit optimistic, it is our desire and our effort to take it not only as inspiration and to enrich ourselves by this music, but also to propagate it according to our abilities and possibilities – as much authentic as possible, in order to bring pleasure to listeners at least as big as it is bringing to us.